The Magic of Movie Theaters

We are happy to announce that the Ruby will open again soon.We are accepting applications now to fill a Show Supervisor position. If you enjoy working with people, managing staff and providing outstanding customer service, this could be your ideal career! Just send your name, contact information, work experience and education, and interest in working at the Ruby to:  Larry Hibbard at [email protected] or by mail: PO Box 499, Manson, WA 98831. Contact us at 509-687-3210 for more information.

The Historic Ruby Theatre was built in 1914 as a state-of-the-art movie theater. The Ruby was closed only twice in its 106 year history – in 1918 during a pandemic, and in 2020 during a pandemic. Since our March 13, 2020 closure, the Ruby has continued to be very much alive, and an active part of our community. We partnered with Riverwalk Books last spring to purchase a new book for each elementary school child in Manson and Chelan Schools. We supported our staff during the downturn, created our weekly newsletter for your enjoyment, developed new pre-shows,  repainted the theatre interior,  installed new seats in the first three rows, redesigned the stage and more. We hope you will enjoy experiencing these improvements when you return to see great films.

This week we want to share with you our two favorite classic films that celebrate the magic of movie theaters, and the important place they hold in the life of their communities. 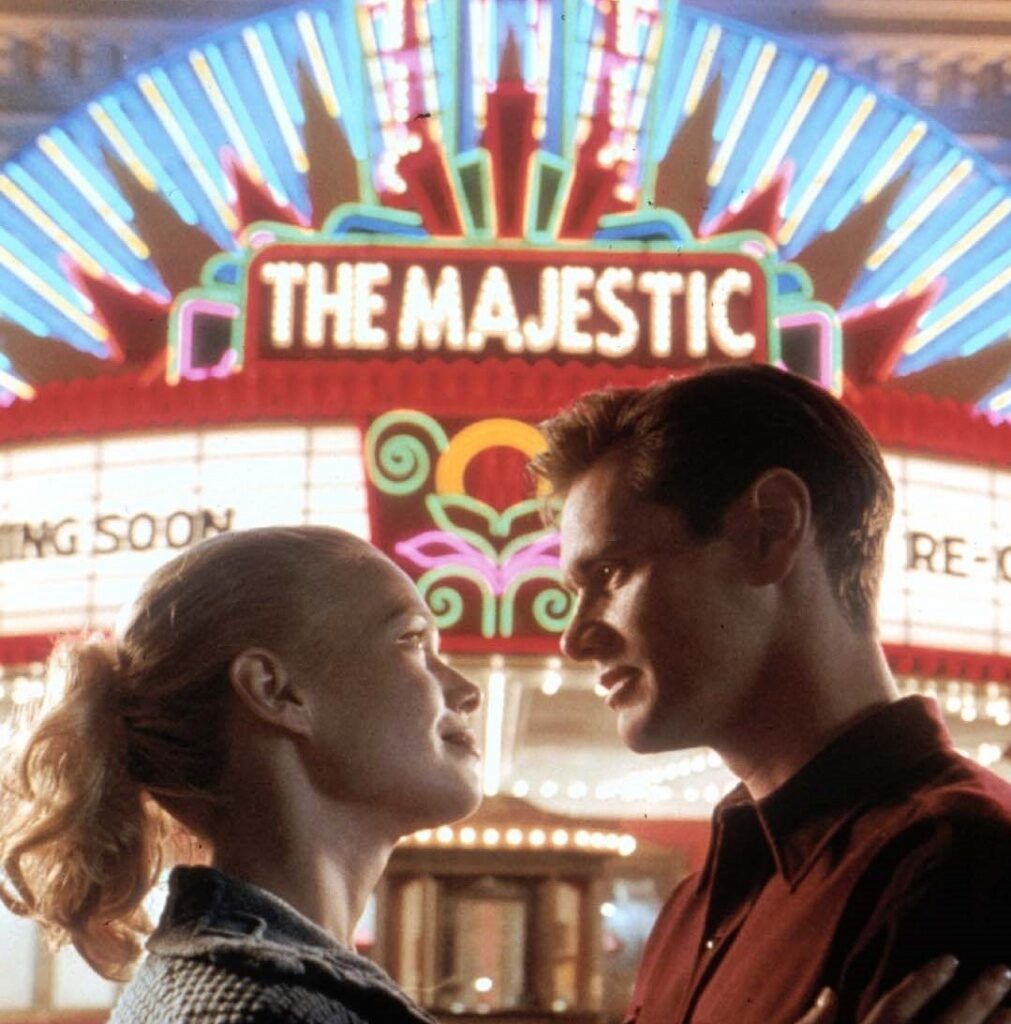 Set in the middle of the Second Red Scare in 1951, a bright new screenwriter named Peter Appleton (Jim Carrey) finds himself accused of being a Communist for attending an antiwar demonstration in college. With his career suddenly destroyed, he gets drunk on a drive down the coast and crashes in the fictional Lawson (actually the Humboldt County town of Ferndale). Struck with amnesia, he is assumed to be a beloved member of the town who went MIA in World War II and is welcomed with open arms. He begins dedicating his life to helping restore the local movie house, the Majestic, which has fallen on hard times.

The wonderful thing about “The Majestic” is its zeal for re-creating a sense of the importance of cinema. Not only does Appleton’s work revitalizing the theater mimic the restoration of the film industry after the horrors of McCarthyism, but also the idea of movie theaters as an essential aspect of a community is shown in how much the town rallies to the Majestic’s cause. There is a heart to the film that transcends the cynicism of Cold War paranoia and modern profit-driven entertainment.

Pioneering director Giuseppe Tornatore and musical legend Ennio Morricone more or less revitalized the entire Italian film industry with this incredible tale of the power of the movie theater. It follows a famous director named Salvatore Di Vita as he recounts his life growing up in the titular Cinema Paradiso in Giancaldo, Sicily. After striking up a friendship with the projectionist (Philippe Noiret), Salvatore falls in love with both the theater itself and filmmaking. Over the course of his adolescence, Salvatore becomes an intrinsic part of the town, after Salvatore becomes the new projectionist under his old friend’s tutelage.