Chelan’s Historic Ruby Theatre opened in the summer of 1914. It was billed as “superior to most theaters, (…) the building is modern and far above average.” The Ruby, named after the first Manager’s daughter, is believed to be the oldest continuously running movie theater in Washington State. The Ruby also is also among the oldest and best preserved movie theaters in the country. In recognition of the Ruby’s historical significance, it was placed on the National Register of Historic Places in 1991. 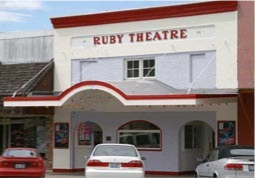 The Ruby is one of many buildings and homes constructed by Chelan brothers, Herbert R. and Morrison M. Kingman, including Campbell’s Resort’s Matson Building a block down the street from the Ruby. The theater was constructed for a cost of $6,500.

There is no record of an architect or designer for the theater and it is unknown where the Kingman’s design originated for their photohouse. Movie theaters were in their infancy in 1914. At the time only a few photohouses had been designed specifically for showing film. Prior to this time, movies were being shown in spaces designed for other uses. Chelan’s first films were shown at the Gem Theatre, located down the street from the Ruby. The Gem was a non-descript building with a flat floor, benches for seating, with no lobby and no projection booth. 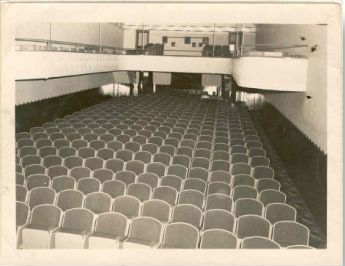 The Kelsey family took over the theatre management in 1919 and moved into an “apartment” behind the screen. They later purchased the theatre and managed or leased the Ruby until 1974.

The movie industry made tremendous advancements during the 55 years the Kelsey’s owned the theatre. To keep up with these changes they regularly updated the equipment and kept the theatre in good condition through their many years at the Ruby. The original piano used to accompany the early photo-dramas was replaced with a photoplayer in 1919, which was then removed when “talkies” were introduced in the Ruby in 1930, with the film “Sweetie.” A new ‘tube’ Mirrophonic sound system was installed in 1947, along with the Motiographic AA Projector. These remained in use until they were replaced in April of 1999 with Dolby sound, a used Century projector and a film platter. 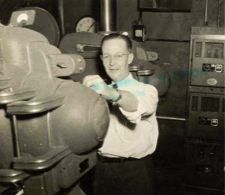 In the late 40’s the exterior was renovated to its present facade. The upper balcony was enclosed as was part of the covered entry and the ticket booth moved from its central location to the side.

The Ruby was purchased on April 1, 1989 by Fred and Jean Payne Vick, and Larry Hibbard, when it was on the verge of foreclosure and the community was at risk of losing its only movie theatre. 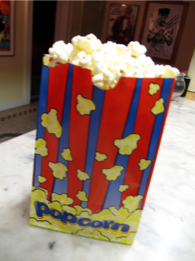 Larry Hibbard and his wife, Mary Murphy currently own and operate the Ruby. They continue to follow Kelsey’s example of providing a comfortable and enjoyable movie experience for Ruby’s patrons. A new concession area was constructed, bathrooms have been renovated, and a new digital projector with an improved sound system was installed in the spring of 2013.